At Barfield, the main aim within the English department is to encourage a lively interest in the subject and to develop skills in reading, writing, speaking and listening.

The children are encouraged to become enthusiastic, independent and effective readers. They are introduced to a wide range of literature through independent and shared reading and given the opportunity to read for their own pleasure as well as to seek out information. The children have a dedicated Library lesson each week in which they can make use of our excellent stock of fiction and non-fiction books in a quiet and comfortable environment. The Prep school read together each morning. We celebrate books and reading in our assemblies and in our yearly whole school celebration of World Book Day.

Pupils are taught to develop, organise and express their ideas for a variety of purposes including diaries, letters, reports, essays, stories, poems and reviews. The pupils are guided in their ability to organise and structure their writing, use paragraphs, punctuation and grammar correctly and develop their vocabulary and accurate spelling. A weekly club has also been established to support children with their handwriting.

Book Fairs are held regularly throughout the academic year allowing the children to purchase books if they wish, with commission going towards the purchase of an even greater range of books for the library, for all our pupils to enjoy.

Here at Barfield we aim to balance the unquestionable importance of a core subject with fun and varied teaching styles.  While the pupils have daily Maths lessons using established Schemes of Work, they also experience learning through more practical means, making use of The Cookhouse and the outdoors.

When appropriate, the Department is able to ‘set’ pupils in Years 6 to enable us to teach pupils and to maximise their access to the curriculum. There is also an additional opportunity to work at a more challenging level for potential scholars in Year 6.

We have a variety of teaching aids such as interactive whiteboards, data projectors and Chromebooks, as well as a host of practical games, puzzles, activities and supportive practical materials, all aided by our school computer network.

We have many mathematical activities which we run at school including Practical Maths Day and a variety of class-based games.

Our history of achievement in Maths is excellent, with a high proportion of children going on to their Senior Schools with scholarships.

We understand that Maths can be a difficult subject to grasp and, we provide opportunities to offer those weaker in the subject with appropriate support sessions and additional 1:1 reinforcement time with appropriate staff.

Together, we aim to make Maths fun and to let each individual child feel confident and successful at their own level.

At Barfield all science lessons are enjoyable. Staff work hard to ensure that the concepts are a combination of academic rigour with kinesthetic learning.

From Year 3 to Year 6 are taught in a modern state of the art Science laboratory that lends itself to various ways of learning. This specialist teaching area allows for excellent practical experimentation, demonstrations and projects. The children enjoy the variety of hands-on learning coupled with debate and discussion about the theories under investigation.

The bespoke Science curriculum is underpinned by the National Curriculum Key Stage 3 elements with three or four topic areas per term in each year group and the topic order is designed to give as much variation as possible within the three main Science subjects of Biology, Chemistry and Physics.

There is an emphasis on the importance of scientific method as a way of developing sound decision-making skills throughout the pupils’ lives whatever career directions that they might ultimately choose. The concepts of identifying “variables” and “non-variables” during experiments allowing for balanced and fair comparisons to be made,  and the nurturing of informed decision-making skills. The excitement Science can bring and the opportunities that exist within this subject are used to inspire the children to consider Science as a career choice in the future.

We learn languages in order to be able to use them. Learning a language should be fun!

We aim to teach languages using a variety of media, including textbooks, flashcards, interactive whiteboards, listening materials, songs and websites.

The pupils are encouraged to learn and use phrases which will be useful to them when on holiday abroad and to attempt to communicate in the foreign language, albeit on a limited basis, whenever they are able to.

French begins in Owls where the children learn through song, games and other activities. The aim is to make learning a language fun. As the pupils progress through both the Lower and Upper Schools they learn both vocabulary, phrases and grammatical structures which allows them the confidence to speak but also adapt the language they already know. Every May all Year 6 pupils visit a chateau in France where they have the chance to visit  local places of interest and also participate in outdoor activities which are all taught in French.

The study of Latin is very much valued at Barfield  but is no longer formalised in the classroom for all; instead is accessible as a Weekly Club.

We learn Geography at Barfield in order to be able to interpret the world we live in. From Year 3, pupils start to look at Geography in more detail; they study the human, physical and environmental features of a variety of countries around the world. Pupils then focus on the continent of Antarctica with an emphasis on the human impacts including climate change and tourism. During the summer term, pupils work on a Barfield project with an integrated Humanities approach. Pupils learn about the history of our fabulous school and have the opportunity to study our amazing outside spaces; learning about the species of animals, plants and insects that call Barfield home. There is a lot of emphasis put on making Geography a fun, relevant and interactive subject.

In Year 4, the pupils consider their sense of place. Where they live and their perception of the places around us, are considered. This unit also allows us to introduce some map work skills at local, national, and global level. Having studied where they live, it is the perfect introduction to consider the location of settlements both historically and today; developing their role play and debating skills while deliberating the locations of greenfield and brownfield developments. Our final unit of Year 4 is an in-depth look at our island nation, thinking about the culture of ‘Britishness’ and what it means. Pupils look at the weather, tourism, physical geography and migration as well as our national parks and food and farming in Great Britain.

In Year 5 more emphasis is put on to the pupils to encourage independent study and they are encouraged to work on projects to hone their skills of analysis and evaluation. They cover topics on tropical rainforests, amazing places and considering why our world is financially uneven.

In Year 6, the Geography department tries to build on the knowledge that the pupils have acquired, as well as stretching them intellectually. In this year, we look at Biomes and how the location and climate create different ecosystems. The pupils look in detail at India and how location can affect whether a country is rich or poor. The children also look at our world as a place to have adventures. Pupils are encouraged to be aware of any current geographical stories in the news and bring in any information that they may have.

Above all, Geography is taught to provide a vital opportunity for children to learn at first- hand about the world and to encourage them to be interested in what happens to their world!

History at Barfield is mostly taught in a chronological manner.  We aim to create a learning environment where children enjoy the curriculum as well as developing the crucial skills of evaluation, analysis and independent thought. We begin in Year 3 with the Stone Age and look at what it would have been like to live in a Roundhouse. Year 3 are taken to Butser Ancient Farm to understand what life would have been like for those living in Ancient Britain. The pupils continue to look at Ancient civilizations as they discover Ancient Greece.

In Year 4, the history of the Anglo-Saxons, Vikings and the Romans is taught. Pupils enjoy developing role plays, learning about houses, and creating Roman shields to act out battle strategies on the headmaster’s lawn.

In Year 5, the children study the Middle Ages, look at how the Tudors shaped the country that we live in today and focus on the Aztec civilisation.

In Year 6 they study the French Revolution, The Stuarts and then Crime and Punishment throughout History.

Religious Studies is taught throughout Barfield starting in Reception and up to Year 6, when Scholarship and Common Entrance papers are taken. All children in Years 3- 6 have one lesson per week. Pupils study many religions but also religious ideas through philosophy.

In Year 3, they begin RE by considering life on a deserted island. The beginnings of a community and how people work together to develop new laws, rules, symbols, celebrations and an identity for their island. The pupils then study creation stories through many different religions and consider their similarities and differences.

In Year 4 the pupils study Islam, then question why Christians follow Jesus, with an in depth study of these two major religions. They then look at sacred places around the world.

In Year 5, the focus is on Buddhism, Sikhism and then a philosophy unit of Wisdom; creating stories with a moral that can then be shared with younger pupils.

In Year 6, the focus is on Hinduism, civil rights and then the pupils also take part in debates on various philosophical themes, for example: “What makes a hero?”  Year 6 is an important year for the pupils as they are being moved towards the rigours of the Common Entrance syllabus.

The pupils are taught to understand

The children will get the opportunity to use technology purposefully to create, organise, store, manipulate and retrieve digital content and learn to recognise common uses of information technology beyond the school.

During the Digital Literacy topic the children will learn:

The children will get the opportunity to design, write and debug programs that accomplish specific goals, including controlling or simulating physical systems and solve problems by decomposing them into smaller parts. They will use sequence, selection and repetition in programs, work with variables and various forms of input and output.

The students will also use logical reasoning to explain how some simple algorithms work and to detect and correct errors in algorithms and programs.

Pupils will gain an understanding of computer networks, including the Internet; how they can provide multiple services, such as the World Wide Web and the opportunities they offer for communication and collaboration.

During the Information Technology topic the children use search technologies effectively, appreciate how results are selected and ranked, and be discerning in evaluating digital content.

Select, use and combine a variety of software (including internet services) on different digital devices to design and create a range of programs, systems and content that accomplish given goals, including collecting, analysing, evaluating and presenting data and information.

During the Digital Literacy topic the children will learn: 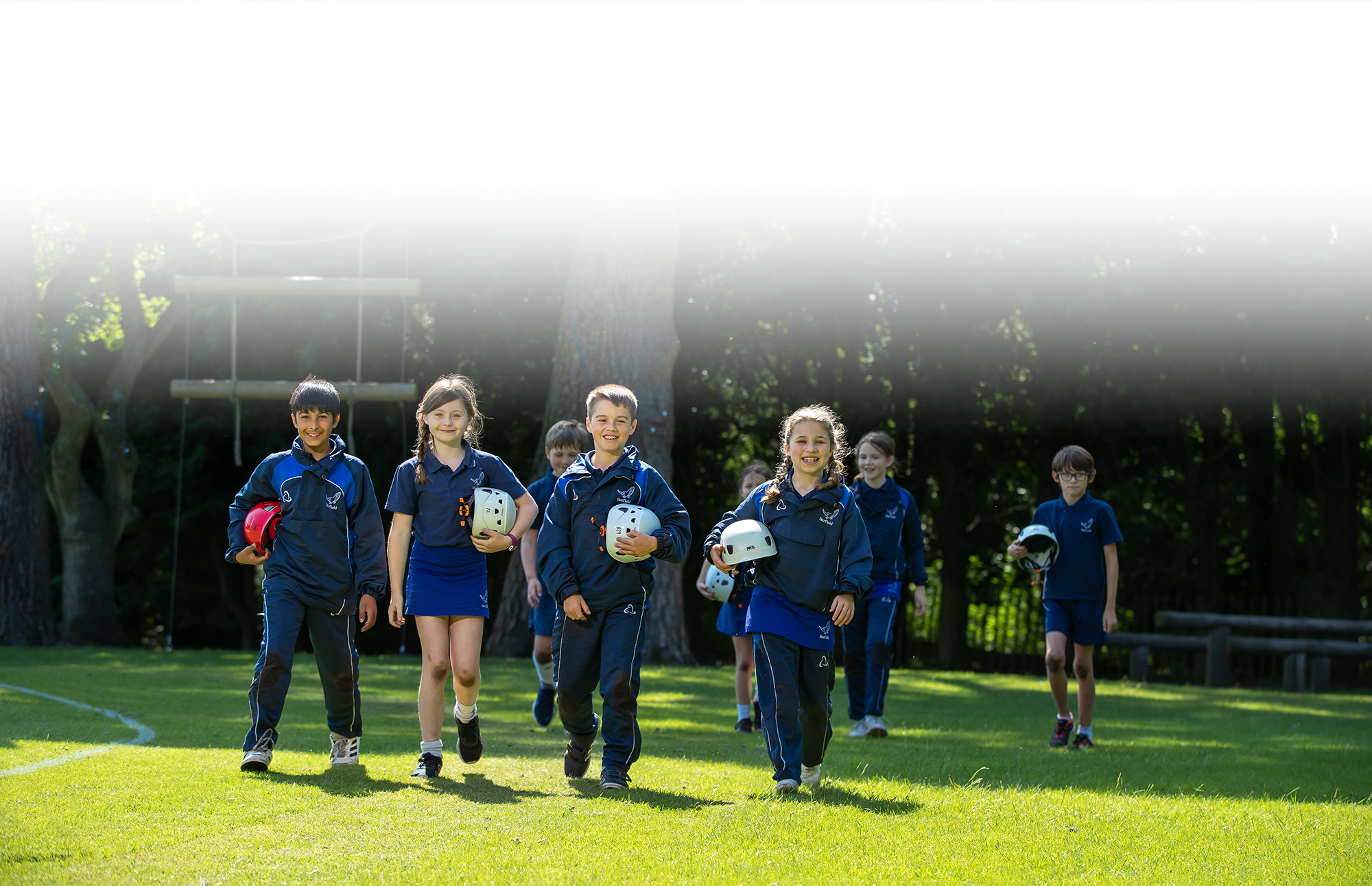